Risley is recorded in the Domesday book as both Riseleia and Riselei, names compounded from two Anglo-Saxon words, hris and leah, which is old English for 'rush meadow' and 'brushwood clearing'. The book was commissioned by King William I in 1086.

At the time of the Domesday survey, Risley was split into two manors. The first, located to the north of the village, at Wood Hall. At one time a moated manor, this passed through numerous owners until around 1587, when the Babington family sold to the Willoughby family. The new owner, Michael Willoughby, demolished Wood Hall and erected Risley Lodge on the site that is now Risley Lodge Farm. This is recorded in the Hearth Tax of 1670 as having four hearths whereas Risley Hall had 33 at the same date. The second manor, from which today's hall has its origins, was the land of the Norman Roger de Bully (Busli).

This land at Risley, together with land at Wollaton, was acquired by the Willoughby family in 1350 when Isobel, sister of William de Morteyne, married Sir Richard of Willoughby-on-the-Wolds. The date of the first building that we know of is from a C16 woodcut. With artistic licence, Risley Lodge is depicted on a hill behind. From Domesday, when land was measured in useable and therefore taxable acreage, until modern censuses the history of Risley has centred on farming. Old maps show a ribbon development of housing along the old toll road with farmland beyond. Detailed examination shows that Risley was the typical English village with a church, a school, a pub, a smithy, a garage, a post office and shop, all surrounded by mixed farmland. Most residents were involved in agriculture or textile mill work.

From Anchitel Grey who died in 1702 it is possible to trace the owners and tenants of Risley Estate to the present day. Notable owners were Sir Thomas Aston. Another Aston, Matthew, surveyed the estate in 1722. A map of this is on view in the Derbyshire Record Office. John Hancock purchased the estate in 1770 passing it onto his nephew, William Hall. The property remained in the Hall family until 1859 when the Reverend Henry Banks Hall sold it to John Lewis Ffytche who in turn sold it to Ernest Terah Hooley. Hooley was an entrepreneur who became one of the wealthiest business men in Europe. His methods led to many of his investors losing substantial amounts of money. He was declared bankrupt four times in total and was jailed for fraud twice. He bought Risley Hall Estate for £5,000 in 1888 and built houses for his estate workers on "The Crescent". After he became bankrupt the first time, Hooley transferred Risley Hall to his daughters and continued to live the life of the splendid bankrupt there until 1941.

After the Second World War, the house was bought by Nottinghamshire County Council who used it as an approved school. Today it is a hotel, care home and retirement complex.

" …. towards the finding and keeping of a minister and schoolmaster for his full stipend and wages as well as in saying divine service in the chapel there then newly erected by me the said Katharine and also for the teaching of children freely without expecting further stipend or hire..."

Dame Elizabeth Grey built the Latin House, Latin School and other associated buildings in the early 18th Century. In her will of 1720, she provided £200 to be invested for the maintenance of a school mistress to teach the girls of Risley, and, from neighbouring parishes, a number of girls equal to those of the boys freely taught in Risley.

A walk around Risley

The historic centre of the Risley reveals a number of interesting buildings and monuments, all Grade II listed. The following text is intended as a quick tour of the village centre, highlighting some of the more interesting features.
The walk starts at Risley Lower Grammar School. This, along with the Old School House, the Latin School and Cottage, was endowed by Elizabeth Grey in her will. The school is a red brick building built upon a sandstone plinth with sandstone dressings and a plain tile roof.

Next along Derby Road is the Old School House. This has two storeys and is again of red brick built in Flemish Bond with yellow brick headers and a steeply pitched tile roof. Past the Latin School, in use until 1914, and Latin Cottage, accommodation for the schoolmistress, is the Latin House, described by Pevsner to be 'one of the best buildings in the county'. Built in 1706 by Elizabeth Grey for the school head master, this two-storey red brick building has a number of interesting decorative details. Above each window, carved into the keystone, can be found a grotesque head while above the door is an ornate raised fillet with the inscription 'A MA PUISSANCE MDCCVI', a quotation taken from the families coat of arms meaning 'to my power'. 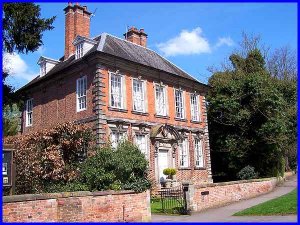 The church, about half its present size, was started by Michael Willoughby and finished in 1593 as a domestic chapel to the hall. Interestingly, the church was built during the reign of Queen Elizabeth I, a period when few churches were constructed. Above the door and on the 17th century alabaster font can be found the family's coat of arms. In addition, above the door can be found three carved initials M, K, W which translate to Michael and Katharine Willoughby. The original rood screen separating the nave from the chancel remains and there is a 17th Century Royal Arms at the western end of the church.

To the rear of All Saints' Church can be found Church Cottage, also Grade II listed; an original timber framed building from the 17th century, partly re-built in 1882, and renovated in 2006. On the south elevation a stone plaque can be found above the door with the inscription 'Harrison's Memorial 1882'.

The war memorial, adjacent to the church gates, is dedicated to those who fell in the First and Second World Wars.

Little remains of the original hall, which was first constructed in the 16th century. Today's hall is an amalgamation of different architectural styles. It was built when the original was destroyed, probably by fire, before 1725. The hall has early 19th century alterations and a west front dated around the year 1900. The early wing is of stone with a steeply pitched red tile roof, the north-east wing, built in the 18th century is of brick with a chamfered stone plinth, plain first and second floor brick bands and a hipped red clay tile roof; the rear of this elevation has the circa 1900 addition in the neo-Tudor style with a red tile roof.

Within the grounds of Risley Hall, there are reminders of the early manor. The garden walls and gateway which run along Derby Road are early 17th century in date, with a later, 20th century, studded wooden door. On the south-east terrace, an early 17th century balustrade, gateway and bridge can be found.
The Conservation Area for Risley was designated in 1969 and extended in 1985. It covers not only the historic core of the village but also the surrounding area.

What is a conservation area?

Conservation Areas are generally located in the older parts of towns or villages where special attention needs to be paid in order to keep the unique qualities and appearance of the particular place.

These areas are vitally important to the quality of the environment in this country because of the contribution they make to a pleasant townscape or village scene. They are the result of many centuries of evolution and will continue to evolve, but also need protecting.

Section 69 of the Planning (Listed buildings and Conservation Areas) Act 1990 requires that "every local planning authority shall from time to time determine which parts of its areas are of special architectural and historic interest, the character and appearance of which it is desirable to preserve or enhance and shall designate such areas as Conservation Areas". This was last done for Risley in 1985.

Conservation must allow for change as well as preservation. Consequently, there are some specific controls and special considerations relating to development in Conservation Areas. More information on this can be found on Erewash Borough Council's website by using the following link:

Ordinary Meeting of the Parish Council

The Parish Council would like to publicly thank Carlton Brass Band for the excellent performance this afternoon at the Bold as Brass Concert.

Thank you too to those residents who attended.

Annual Governance Statement, Annual Accounting Statement, Certificate of Exemption and Notice of Exercise of Public Rights for 2020-21 can be found in the document section under About the Council on the left hand side